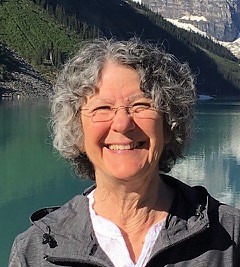 LCT: Your novels don’t shy away from real problems facing our world today. What made you decide to embed timely themes about climate change and social justice into your books?

EM: I started writing fiction in my fifties but I’ve been a voracious reader all my life. The books I’ve loved most are political novels, stories about social justice in the past and contemporary times. I have learned from those books how fiction can entice readers to consider justice and injustice in fresh ways. How politically-themed novels can offer an experience where something of importance is at stake, often from a perspective different from our own, and can encourage us to come to our own conclusions. It can be tricky, of course, because there’s a tendency in some political fiction to be didactic, and no one likes being lectured at. Luckily, fiction is better at asking questions than answering them. That’s what I try to do in my novels – ask big questions that explore and illuminate the issues I can’t stop thinking about.

LCT: The Rosenberg Fund for Children, a nonprofit founded by your husband and run by your daughter, offers grants to children of targeted activists. Did your knowledge of the collateral damage to families play into the work?

EM: The stories of the Rosenberg Fund beneficiaries have greatly enriched my knowledge and appreciation of the very real risks facing families fighting for human rights and equality. I feel honored to have met some of these activist families. But I think the story of collateral damage that has affected me most is that of my husband, Robert Meeropol, whose parents were executed by the U.S. Government in 1953 for a crime they did not commit. My husband was six years old when his parents, Ethel and Julius Rosenberg, were killed. Robby’s story has profoundly affected my beliefs about justice and injustice.

I never wanted to write fiction about the Rosenberg case. But things we feel strongly about, issues that are critically important to us, have a way of showing up in our fiction. My fourth novel, forthcoming in spring 2020, is about two sisters who are arrested at an anti-Vietnam protest march after their action results in harm to a police officer. One sister will do anything to stay out of prison; the other mounts a strong political defense. This might sound a bit familiar to anyone who knows that Ethel Rosenberg’s brother David Greenglass was the only witness against her; her sibling’s testimony sent her to the electric chair. To me, fiction provides a way to delve deeply into the mess our world is in, creating characters who work to make change despite the risks of doing so, and trying to discover and nurture hope in the process.

LCT: In your previous career as a nurse, you saw firsthand the benefits and shortcomings of our for profit medical industry. Have you considered writing about this?

EM: I have written about health care. I worked as a nurse and then a nurse practitioner for three decades, and certainly that experience has had an impact on my writing. My first novel is essentially about a medical ethical issue. One of the characters who shows up in two novels is a young woman with spina bifida. Zoe is a composite of several patients for whom I have enormous respect and admiration. The manuscript I’m working on now is also health related. One of the pleasures of being a late-blooming writer is having so much life and work experience on which to draw!

LCT:  How do you get ideas for your novels and do you plan them based on your own concerns for the future?

EM: My novels all have social justice themes, but I never start with theme. The spark is usually a character, or two characters in opposition to each other in some way. As I write the first draft to discover the story, the themes worm their way in. As I was developing the two main characters in my first novel, House Arrest, I discovered that both women were haunted by very different childhood memories – one’s father was imprisoned for anti-war activism and the other’s was a Ku Klux Klan leader.  The beliefs and actions of their parents had huge effect on who these characters are, and how they act in the narrative. The resulting themes of whether or not it’s sometimes right to bend or break the law, and of what constitutes a family, grew directly from these characters and their stories.

And then, sometimes a novel surprises you. My second novel, On Hurricane Island, started when I was going through security at a major airport and I imagined a woman ahead of me in line. I “saw” her being taken away by TSA officials, and wrote the novel to find out what happened to her. I had no experience reading or writing political thrillers, but that’s where that book wanted to go, and that’s where it took me.

LCT: Can you name some writers you’d consider to be pioneers in the world of social justice writing? Have any of them influenced your own writing?

EM: There are so many writers I admire for their social justice fiction, whose work has influenced not only my writing but also my way of looking at the world. Some of my favorites are Kamila Shamsie, Gillian Slovo, Rosellen Brown, Octavia Butler, Edwidge Danticat and Laura Z. Hobson.

LCT: Is the current turbulence in our country impacting your writing? If so, how?

EM: Our country, our world, is in such chaos. We are poised at the edge of climate catastrophe and the culture of hate is strong and virulent. This toxicity and turbulence both make it harder to write – they disturb the necessary quiet and focus needed – and they make the writing feel so much more urgent. I think the current political climate makes fiction and poetry even more critically important. Facts are simply not enough to make the necessary change happen.

I think of my writing as part of my social justice activism. And I’m starting to think more about how the idea of activism and activists are portrayed in fiction. Can we as writers have a role in encouraging our readers to become more active in the world, in whatever ways feel right to them?

LCT: What are you currently working on?

EM: I’m working on the first draft of a novel set on the site of a decommissioned state mental hospital, where the residents of six bungalows, originally built as housing for hospital staff, search for an elderly woman who goes missing. The missing woman, her daughter, her husband who was the psychiatrist administrator for the hospital during its last decades, the detective in charge of the case, and the other neighbors all share the narration. I think of my writing process as following the Kurt Vonnegut School of Fiction – he once said that to write a novel, you must jump off a cliff and develop wings on the way down. I’m flapping away with this story, trying to stay airborne.

LCT: Is there any other question you wished I’d ask that you want to answer?

EM: The only thing I would add is that writing can be a lonely pursuit, and writing about injustice – about racism and sexism and climate justice and homophobia and anti-Semitism and the list goes on and on – is perhaps even lonelier. Having a community of writers with whom to share the work, share the vision, share the despair and the hope, is critical to me. Writing is primarily solitary work, but we are not alone.

Most of our battalion had rotated through guard duty at the palace. We knew her as a rosy girl who escaped her abuela and marched with us, two giant pink steps to each of ours, her thin arms swinging in perfect timing. Under our watchful eyes, she grew into a young woman, enchanting in her fierce concentration.

Those days, the troubles slashed families. Many of us had cousins, brothers even, with the rebels. We had kin who crossed the street to avoid us as we marched two by two on our rounds, wild sunlight flashing off our polished boots. Most of us had daughters or granddaughters her age; we hugged them often those last weeks, as the rebels’ numbers grew and their victories mounted.

One night last month she slipped down the moonlit path to the university, her slippers dancing to the coqui chorus of tree frogs. We suspected a young man and followed her, capturing our smiles behind our hands. She lost us in the narrow streets bordering campus, but by the next morning our informants gave up his name.

We warned her father, through the appropriate channels, of course. We should have known that girl wouldn’t back down at her father’s command or her mother’s weeping. Generations of breeding culminated in her staunch person. When she dragged her suitcase down the hill and joined her lover’s cell, she twisted the bloodlines of her family to bear arms against itself.

Still, we never dreamed it would go this far. We underestimated her zeal and her father’s too. When our orders came, we verified them with our commander, then shook our heads. Our assignment was simple, but we carefully planned every detail. That last evening we assembled in our places at the edge of campus facing the building where the rebels hid.

She and her young man stepped out together onto the crumbling third floor balcony. She came forward alone to the iron railing. The crowd packed the streets below, screaming her father’s name and burning his likeness. When she raised her fist, the crowd quieted. A coqui sang in the moment of stillness, in chorus with the clicks as we released the safeties. As she started speaking, her hair caught the scarlet of sunset.

We never considered how history would judge us. Still, at the last moment, those of us not carrying rifles closed our eyes.

Originally published in The Drum: A literary magazine for your ears. May 2010